The latest issue of broadsheet 21, May 2018, features the Australian-based poet and editor Mark Young, who was born in New Zealand in Hokitika. Young is one of New Zealand’s most published contemporary poets overseas and the issue celebrates his contribution to world literature.

The editor Mark Pirie writes in his Preface:

“Mark Young, the Australian-based poet and editor of Otoliths, is a poet originally from New Zealand and internationally published.  He is one of our most published poets overseas, where he has produced many collections of his poetry,  including the 600 page, ‘at least nine new books in one’, The Codicils.

He has been around in periodical form since the publication of his poem ‘Lizard’ in the New Zealand Listener in 1959. Other early work featured in Arena, Experiment, the New Zealand Poetry Yearbook and Argot in the early 1960s.

I first came across his work when Alan Brunton sent me a review copy of The Right Foot of the Giant as editor of JAAM magazine in 2000. Alan’s publication helped re-establish his reputation as one of our best contemporary poets. It included poems like ‘In Memoriam: Robert Desnos’.

It’s surprising that his work isn’t as known as that of his contemporaries like Ian Wedde, David Mitchell, Bill Manhire, Peter Olds and others,  in New Zealand, because that is the class of company he keeps.

He remains a fascinating literary figure on both sides of the Tasman, editing the online journal Otoliths, a magazine of many e-things, which includes a wide variety of poetry forms and features poetry as contemporary art and image texts from writers internationally.

An innovative practitioner, both in technique and methodology, he remains an elusive figure in New Zealand where he was born in Hokitika in 1941. I am lucky enough to feature his work in broadsheet and promote it to a New Zealand audience.

I would like to thank the writers who replied to the invite I sent out on advice from Mark Young himself, and indebted to writers like Ian Wedde, Michele Leggott, Thomas Fink (USA), Lisa Samuels, Eileen R Tabios (USA), Mercedes Webb-Pullmann, Pete Spence (Australia), and Sheila E Murphy (USA) for sending in work and appearing alongside Mark Young.

Two previously published poems by Alan Brunton also reappear with permission of his estate in recognition of the work Alan did in collecting Young’s work from the 1960s/1970s in his first major book, The Right Foot of the Giant.

Michael O’Leary’s recent unpublished poem on Paul McCartney’s December Auckland concert is another gem I have included outside of the main feature. 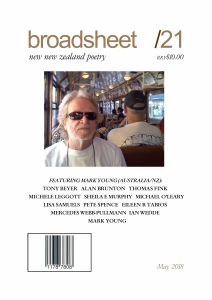